The woodlands on the Furnace Hills (the name of the series of ridges upon which Governor Dick sits, forming the southernmost hiccups locally of the Appalachian range) are not exactly first-growth forest; having all been cut and regrown a number of times, certainly back in the heyday of the nearby iron furnaces and foundries. The very name Furnace Hills should have been some sort of clue.

Originally the cut wood was burnt as is, but as technology progressed charcoal derived from the wood was determined a far more effective fuel for furnaces. The charcoal was actually made on site, up in the forests: A large circle of trees were felled, trimmed, cut up into manageable sizes and heaped in the center of the new clearing. Covered with an insulating layer of dirt then fired, the wood smoldered for a long period, weeks, until the wood had all been reduced to charcoal. This better and incidentally lighter and far easier to transport fuel was then heaved down the mountain and off to the nearby furnaces (such as the excellently preserved and visitable Cornwall Iron Furnace nearby). A practiced eye can still make out signs of such charcoal circles in the forests to this day.

An early owner of the local forests was an English emigrant called Peter Grubb, who truly can be said to have instigated the iron tradition in the area, recognizing and exploiting the confluence of excellent iron-ore bearing rock in the mountains, free-flowing streams and a ready source of combustible fuel to hand. The Coleman family however were the true industrialists and who profited most from the woodlands and the area as a whole; their marks are everywhere. Grubb sold out to the first Robert Coleman in the late 1700s.

The Colemans owned a number of slaves, one of whom was called Richard. Estimated to be born in 1760, very little is known for certain about him, but legends abound. Costing 110 Pounds (about the same as a small house) he was the last slave purchased for the Cornwall Iron Furnace; he was one among some 50 slaves owned by them between 1776 and 1785; by 1792 he was the last one left. Richard was renowned for his superior intelligence, character, and skill as a mason, being hard-working and well-liked by his fellow workers as well as his masters. He possibly worked in the furnace at least for a while and also as a collier and in the woodshop.

Later his purview was charcoal production on a certain mountain on their estate; those with whom he worked nick-named him ‘Guv’nor’ (still an English term of respect); hence Governor Dick—the name stuck. He is reputed to have lived adjacent to a spring at the northern edge of the park; The spring, cased in masonry it is said of his own work, is still there as is a small pond which it feeds. Close to the spring is a signifying plaque, at a minor entrance to the park on Fourth Street on the outskirts of Gretna Heights.

He probably became an indentured servant when released from service from the Furnace in 1800 or so. Legends that have arisen about him are that he was a preacher, a yeoman in General Washington’s staff, and that he was a reader of natural signs. Whatever the ultimate truth, he made an indelible impression during his time on the hill that he will forever be remembered as its namesake.

Robert Coleman, really the last of the long Coleman line, was as late-nineteenth century robber-baron industrialists go actually quite enlightened. Along one of his railway lines, built to transfer ore in and iron and steel out of his Cornwall-based empire, was a watering stop for the typically thirsty railway engines of the time. He decided to create a park for the enjoyment of his employees and their families in the woods in the valley around this stop. Fancifully, it was named Mount Gretna, supposedly after the Scottish border town of Gretna.

The park steadily grew; refreshment stands, an exhibition hall (now the roller rink), a lake from the dammed Conewago Creek, a rather posh hotel built at the west end of it; all in all, a splendid resort. He sold some 80 acres on the far side of the valley to the Pennsylvania Chautauqua for them to hold their annual summer meetings; a tract similarly went to the United Brethren Church for their summer Camp Meeting on the opposite side of what is now Pinch Road for them to do likewise. Members of these two organizations built themselves summer cottages in these two developments—in the case of the Camp Meeting, houses on allotments intended and sized accordingly for tents!

The result by the turn of the century was a culturally rich community revolving around marvelous public buildings and a plethora of closely-packed typically Victorian gingerbread adorned munchkin houses, and further enhanced by the new and less physically constrained development of Gretna Heights, to the east of Campmeeting. 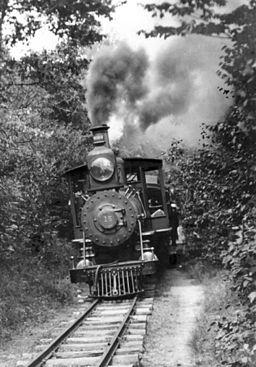 Robert had a fascination with railways; much as some of us have built model railways in spare bedrooms or basements as a hobby, he decided to build a toy train-set writ large, as his considerable means afforded.

As an entertainment for visitors to his park, this narrow-gauge railway (2-ft. gauge) started adjacent to the main Cornwall and Lebanon Railroad station in the park, ran beside Soldier Field and behind the lake, passed in front of the hotel (where guests may, naturally, have alighted or embarked) and across what is now Rte. 117, climbed up behind the Chautauqua area and eventually crossing Pinch Road well up above Campmeeting. Once across the road it clawed steadily up the hill for half-a-mile or so until it reached a switchback, a large loop, on which the train reversed itself in order to best follow the terrain up the hill. Still climbing, more steeply now and clockwise around the dome of the mountain, it eventually reached a tight loop around the very top of the mountain: Where the tower atop Governor Dick now stands.

Considering the guys-with-picks-and-shovels era in which this railway was constructed, it was no mean feat of civil engineering. Most of its path is plain to this day—following it is a great exercise in industrial archaeology—and parts of it, especially its ascent through the park and the switchback, cause pause for respect. And a wish to have been able to have traveled it at its prime.

Narrow-gauge railway enthusiasts still to this day get all misty-eyed and giddy about the Governor Dick railway and its engines; it is something of a legend. Sadly, it wasn’t to last; it was hideously expensive to run and maintain; when Robert Coleman had his financial train-wreck in the mid 1890s bringing down his empire (brought about by over-investment in, surprise, railways), the runs up the mountain ceased. Later, in 1915, when some soldiers from the Pennsylvania National Guard encampment near the village (Soldier Field) managed to topple some of the cars with injuries resulting, the appeal palled, the service stopped, the tracks were dismantled, the engines sold for scrap.

A self-made man in the fuel-oil business, Clarence Schock, whose Sico Oil Co. based in Mount Joy, PA is still in business, steadily bought up the tract that is now the park in bits and pieces; from Henry Koser in 1934, Farmers National Bank of Lititz in 1937 and finally Bethlehem Steel in 1940. It was a glorious nature preserve for him and his wife, Evetta. In 1953 he granted it to the Mount Joy School District to administer, with the idea of it being a nature reserve for the children of that district, and a publicly accessible park.

"Unless someone like you cares a whole awful lot, nothing is going to get better. It's not."